When I first started working with the inmates at St Heliers prison, I would go up for a week at a time in order to train the inmates in the skills required for them to do their part in the retraining of the ex-racehorses from the Thoroughbred Rehabilitation Trust. Horses donated to the Trust, go to St Heliers to let down before we commence working them. Most racehorses, when they leave the track, have had no socialisation since they left their mums as foals. Generally, for most, if not all of their lives, they are wrapped in cotton wool, stabled and spelled in individual yards so they don’t get hurt. Because of this, they miss out on learning the critical social skills required to be a horse. Imagine keeping a kid in an isolated room, sometimes letting him see other kids, but not allowing him to play, touch or interact. You feed him what he needs, you keep him immaculately cleaned and healthy in the body, lock him up from say, one until twelve years of age, give him very little education and no communication skills and then send him to high school. The result would be terrible for the kid. Well that’s where a racehorse often is at the end of his racing days. At St Heliers, we have big paddocks where we put five or six horses in together, often with a horse that has already been socialised or better still, an old tough draught horse. Let the old fella teach the young fellas how it’s done.

Eventually, my focus went from the horse I was working on to Digger. “That’s not Cranky?” I enquired. “Yep,” came the reply with a cheeky proud smile, “that’s him.” “No way!” I replied in awe, “I can’t believe it!” This guy was a horseman, some people are born with it. Digger had been taken off track by outside influences and he would always have to control his temper, but he had what it took, he could get inside a horse’s head. Digger became the backbone of the program in prison, as he was passionate and committed.

I decided that when he got out, I would employ him immediately, but I hadn’t seen him ride. When Digger had about two months to go on his sentence, I turned up with a saddle. “I want to see you ride.” I said. He was apprehensive about getting into a dressage saddle as he was used to a big western or stock job. Digger had become an expert at working in hand and I knew all he needed was to learn to sit still and he would ride as good as anyone. I put him up on Cranky, “Okay, put your legs here, sit up straight, relax your shoulders.” he did this well, “Now just do the same things you have been doing on the ground.” Cranky rounded into a nice frame, he bent calmly around Digger’s inside leg and walked off in a dressage frame. By the end of the lesson, Digger and Cranky could have won a preliminary dressage test – really! This was the horse’s first ride off the track and Digger’s first time in a dressage saddle and I couldn’t have been prouder. Digger now had two months to work on his riding before he would be released. I left Cranky with him, I couldn’t have done a better job myself so why would I take the horse away? Digger came to work with us at the TRT.

Digger part of the team

On his first day, we did an exhibition at Equitana Sydney, what a culture shock. From the prison with a few inmates, all just existing from day to day, to assisting in front of a crowd of hundreds in a team that was earning respect. Digger took it in his stride and I think he felt he had arrived where he needed to be. Digger worked with us for two years, training dozens of horses.

Digger re trained dozens of ex racehorses with the TRT

He finished Cranky’s training and we found him very good home. Digger had completed a farrier’s course in prison therefore saving us tens of thousands in shoeing costs. Unfortunately, we don’t pay that well.

Cranky once his retraining was complete

Digger had a new girlfriend who had a couple of kids. She had been the wife of a mate whom he was looking after, who had died of cancer. She was a great lady and really good for Digger, eventually one thing led to another and they became a couple. Digger was being loyal to his mate in looking after his wife and kids and she had a good man. They had a child and eventually Digger had to move on. He needed to make the money he could, working for himself. He had given me two good years on the outside and became a great mate.

Digger would do anything for me as I would for him. I wished him all the best and off he went, he now works for himself as a farrier and horse trainer. Recently he helped me out at a course for soldiers coming home from conflict with PTSD, I can’t tell you how proud I was of him. He was a teacher and I heard him give the same advice that I had given him, “Be as firm as you need to be, but as soft as you can be.” 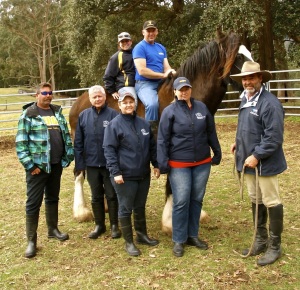 Digger up the front with the soldiers he is a teacher